Notice: This tutorial really needs to be updated, I'll try to do it asap.

This tutorial will tell you how to make a simple winter scene. Some fir trees and a snowman. It is supposed to show you how to use the most common Blender fonctionnalities (modeling, adding materials and textures) and shortcuts. When a shortcut is used for the first time, I'll say something like "press the x key". When I use it again, I'll just put something like "(x)".

1. If there's a squarePress the X key to delete the square  that is in the middle of the scene. Press the space bar. Select Add > Mesh > UVSphere to add a sphere in the scene (click on the OK button for the number of segments and rings, 32 is perfect). Zoom in ("+" key or the scroll button on the mouse) and press the S key (size) to make the sphere 4 squares wide. (if you want it to be excactly 4 square wide, hold the Ctrl key while you move the mouse ).
This is going to be the body of the snowman. 2. Press the Tab key to switch to the oject mode. (the sphere is now displayed in pink). On the bottom of the 3D view, there's a little menu with icons, click on the one circled in red (or press F9), and change the values of the 2 fields with a name that fits (e.g. SnowmanBody). It is not necessary to name the object, but that's a good habit to have :) 3. Add a 2nd UVsphere in the scene, and then switch to the front view (numpad 1). Resize (S) the sphere to 2 squares wide. Switch again to the object mode (Tab) (when you create and object, Blender automatically switch to the Edit Mode). Name it SnowmanHead (as done in the previous stage).
Now press the G key (G=Grab) and move the head on top of the body.
You should have something looking like this. This is the beginning of the snowman. (You can add him some "arms" if you want, or a 2nd snowball for the body). If you're satisfied with the shape of your snowman, you can "link/join" all the elements together. Select them by pressing the B key and drawing a square all around them. Then press Ctrl+J and click on "join selected meshes".

4. Now, let's create his face. Stay in the front view, press the space bar and choose Add > Mesh > Cone. Switch to the side view (3 on numpad). The cone is going to be the nose, and as you can see, it's much too big. Deselect all the points by pressing the A key. Then select only the points on the right (the base of the cone)(B). Press the S key and decrease the size of the base of the cone. Switch to the object mode(Tab), and press the S key to decrease the size of the "nose" of the snowman.  Then put the nose (G) of the face of the snowman.

note : the other sphere you can see is only an arm I added to the snowman 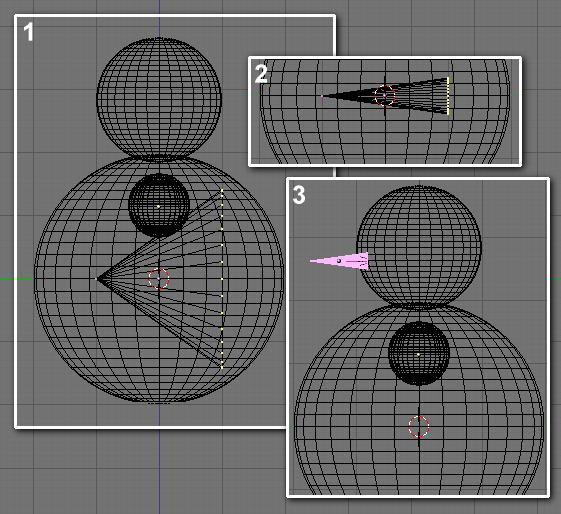 5. Switch to the front view (1 on numpad), add a sphere, and make it small enough (S) to be one of the eyes of the snowman. Press Tab to be on the object mode, and put (G) your sphere at the place of one eye. Then, with this sphere still selected, duplicate it by pressing Shift+D, and put it (G) at the place of the second eye.

Zoom in (+) and select the 2 eyes ( right-click on the first one if it's not already selected, and Shift+right click to select the other one. They should now appear in 2 different tints of pink. Be sure to be close enough not to select the snowman instead of the eyes. (If it happens, press the A key to deselect all and try again, or press the B key and use the middle mouse button to draw a square around what you want to deselect.) Now, join the 2 eyes (Ctrl+J). 6. Keep the eyes selected, and go on the top view (7 on numpad), and move the eyes as shown in the picture. To be sure they're visible, press the Z key to switch to the "Solid" mode (instead if the "wireframe" mode), and move around the snowman (hold the middle mouse button down, and move the mouse). As you can see, the snowman is all grey. We're going to make it look better. Press Z once again to switch back to the wireframe mode. 7. In the object mode (tab) select the snowman body.Now go to the editing menu (F9 or the button that is circled) and click on "Set Smooth". If you press Z now, the snowman should look smoother. Then, click on "New" to create a new material for the snowman, and on "Shading" (or F5) to go on the shading menu. 8. Name the material "Snow", and change the R,G,B values to 1, to get a white color, and also set the "Hard" value to 1 (If it's bigger than 1, you'll get a grey snowman looking more like metal than snow) and the specularity value to approximately 0.15, and the "Ref" value to 1.

If you go on the solid mode (Z) once again, you'll see almost no changes. They'll be noticable only if you make a render of the scene. (This is the F12 key. If you see nothing, don't panic, that only that your camera is not "watching" your snowman. Select the camera (the triangular stuff that should be hidden somewhere in the scene - If you deleted it before, press the bar and choose Add>Camera) and use the rotation ( R) and move (G) to point it at the snowman. Press the 0 key (zero in numpad, not "o") to be in the "camera view" and check that you can see the snowman, and try to render the scene again.)

9. Now, select the nose of the snowman. On the shading menu (F5) click on "Add New" to create a new material for this part. Name it "Orange" or whatever you want, and set the RGB values to get something orange.

There's a big probability that the nose still looks very dark if you make a render (F12). You could change the "Ref" value to 1, and tweak the "Spec" and "hard" values if you want. But the fact that it looks dark is mostly a light problem, and we'll fix the light later.

Do the same thing for the eyes of the snowman ( name the material "coal" for example, and set the RGB values to zero).