A planet creation script, it can be downloaded here.

It allows to create a planet lit on one side. The size and color of the planet as well as the angle for the light can be set

This is a short explanation on how to use the planet creation script in order to get the best results.

First, put the script in the scripts directory used by GIMP ( in general ~/.gimp-X.X/scripts/, or any other directory you might have set as the a script directory in the Gimp preferences.)
Then the script should be accessible in the Create> Misc> Planet Render menu (or Xtns> Script-fu> Misc> Planet render menu, depending on your version of GIMP. See above. ).

About the script parameters: 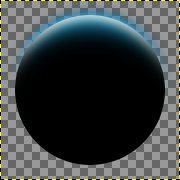 The default planet, without background. In order to make the planets more realistic, you could add a texture to them.

Take (or create) a texture image rather granular, and approximatively twice the size of the planet you want to create.
For example this image (thanks to TiZeta for the image).

Then, in the image menu, select Filters> Glass Effects> Apply Lens. In the dialog box of this filter, choose "Make surroundings transparent" and set the Lens refraction index to about 1.6

The texture should now look like it's mapped onto a sphere, with the center of the image looking "stretched". Scale the image by about 0.5 to make the strech effect dissapear. Then desaturate the image (Colors> Desaturate). You should now have something looking like this With the script, create a planet that is the same size as your texture (here 256pixels - black background added after) 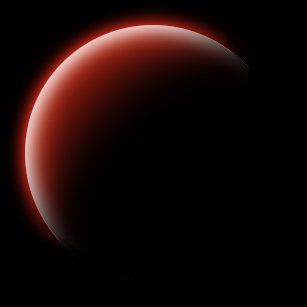 Paste the layer with the texture on the planet image, and place it between the "planet atmosphere" layer and the "planet base" layer.
Then, set its mode to "Grain Merge" (or any other mode that you think that could fit, the best is to try all the modes). That's all :) Here is an example of some planets I created and included into a space scene.